I was fascinated with mushrooms as long as I can think and always loved eating them. In the woods around our home in Germany, we used to go “shrooming” to collect edible mushrooms, and then cook a big meal with friends from our bounty of the fragrant fungi.

When we mention mushrooms and their medicinal power, the first thought that comes to mind for some revolves around “magic mushrooms” and their intoxicating effect. But rest assured that’s not at all what this article is about!

While there are fungi that can lift you into higher realms of consciousness with their carefully administered poison, my intention is to stay fully grounded here and focus on the fascinating array of totally safe mushrooms that have been used in Eastern medicine for millennia for their proven health benefits and medicinal powers.

In Western medicine, mushrooms have gained more popularity in recent decades as health supplements in form of powders and teas.

The fact that even pubmed.gov, the website of the reputable National Library of Medicine, finds favorable results with certain mushrooms in potential cancer treatments is highly encouraging for those of us who seek natural treatments as main or adjunct therapies.

And while mushrooms are neither plants nor animals and belong into a kingdom all on their own, they are great to enjoy as part of any vegan or vegetarian diet. Most of the medicinal mushrooms can be consumed directly as food, but a few are too hard and woody, and should only be used in powdered form.

In this article I will focus on the most popular and potent mushrooms used in Traditional Chinese Medicine (TCM), which are also widely recognized in scientific studies around the world. You will find a description of their uses, health benefits and what to look for to make sure you get a quality product.

So, what makes medicinal mushrooms so valuable for human (and even animal) health?

Mushrooms live in a competitive world where they need to outcompete other molds and fungi that are looking for the same food sources as they are. They also have to fight off bacteria and other microbes who may want to eat them.

Just like poisonous animals and insects that use toxins to protect themselves, mushrooms do the same thing to prevent being eaten or taken over by other lifeforms.

Many of the compounds they produce to do this aren’t harmful to humans and act as natural antibiotics in our bodies when we consume them.

Mushrooms produce the a wide range of vitamins and minerals, similar to fruits and vegetables. They also produce vitamin B and vitamin D that most plants lack, making them an important dietary addition.

Mushrooms contain both soluble and insoluble fiber, which is vital for good digestive health and can lower the risk of colorectal cancer and other diseases.

Mushrooms contain antioxidant compounds that seek out free radicals and remove them from our bodies. This decreases the amount of oxidative stress in our bodies and damage done to our cells and DNA.

All mushrooms contain high amounts of beta glucan, which helps to stimulate the immune system and offers other health benefits, including helping with allergies, asthma, chronic fatigue syndrome, and other conditions.

Polysaccharides are long complex chains of molecules bonded together and mushrooms are full of a wide range of these. Potentially 50 or more of the compounds across different varieties of mushrooms.

Different polysaccharides have different benefits. The ones found in mushrooms offer benefits including anti-cancer, anti-obesity, anti-diabetes, and antibiotic properties.

If you would like to geek out a bit, here is an abstract on pubmed.gov on promising use of medicinal mushrooms for cancer therapies: https://pubmed.ncbi.nlm.nih.gov/30018750/

How long have medicinal mushrooms been in use?

There are over 2000 species of edible fungi on the planet, but most of us may have hard times naming more than 20!

Our ancestors have used mushrooms as medicine for thousands of years. The Greek physician Hippocrates, circa 450 BCE, classified the amadou mushroom as a potent anti-inflammatory and for cauterizing wounds. The alchemist Tao Hongjing, from the 5th century, described several medicinal mushrooms, including ling zhi (reishi). Ötzi, the Ice Man who lived nearly 5300 years ago, carried amadou and a birch polypore tethered in a pouch to help him survive in the Alps of northern Italy. First peoples of North America used puffball mushrooms as wound healers. And while mushrooms have long been used by various cultures, only recently has modern science rediscovered what our ancestors knew long ago—that mushrooms can be powerful medicines.

In addition to being a staple in Far East Asian cuisines, medicinal mushrooms have been used in traditional Chinese medicine (TCM) for millennia, with estimates varying from 3000 -7000 years. The supposed oldest official list of 365 medicinal substances, Shennong Bencao Jing, contains the materia medica of TCM including 20 medicinal mushroom species, dating from the 29th century BC.

The list grew in 2013 in a work called Medicinal Fungi of China by Wu Xinglian and Mao Xiolan describing 835 mushrooms, of which 500 were said to have antitumor effects. And since then, even more discoveries have been made.

The best-known medicinal mushrooms and their benefits

The most popular and well known of the vast range of medicinal mushroom goodness are:

This is a mushroom well tested for its anticancer properties, but it has many other benefits too: it’s known as powerful immune booster and has calming properties. Thanks to the compound triterpene, it is mood enhancing and has applications for depression, anxiety, and better sleep. It is also referred to as longevity mushroom.

Reishi can be used to help with heart disease, cancer, diabetes, inflammation, liver damage, and many other conditions.

The #1 medicinal mushroom for better brain health, clarity and mental focus, used for preventing and treating Alzheimer's and other neurological diseases. It fosters the production of the bioprotein NFG (nerve growth factor) and myelin, both vital for brain health. Therefore, it can also be used regularly for improved concentration and may aid with memory.

It is useful in shrinking or stopping the growth of tumors and contains compounds that can help regenerate tissue in the brain.

Lion's Mane can be eaten but is usually found in power form in the West.

The anti-inflammation powerhouse fighting free radicals, lowering bad cholesterol and supporting healthy digestion, it has also been found to have anti-aging properties.

The medicinal properties of chaga include use in treatment of cancers and as a topical treatment for swelling or wounds. It also has a mild blood sugar lowering effect.

Shiitake
The heart-friendly mushroom! It comes with phytonutrients that can prevent plaque buildup and inhibit the absorption of cholesterol in the liver. It also aids blood pressure and circulation.

Shiitake can also be used to treat viral infections such as hepatitis C and HPV, and most conditions where the immune system is compromised. They might even help prevent dental cavities!

Shiitake is delicious and can be consumed cooked in many dishes. 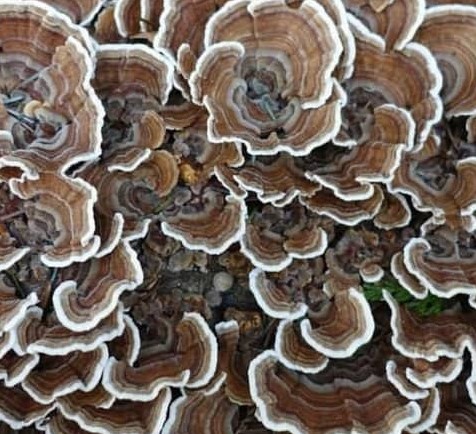 Turkey Tail
The polysaccharides in this mushroom stimulate the immune system and have been found to be powerful anticancer fighting compounds. Turkey tail mushrooms have a number of benefits but are most well-known for cancer treatment.

Cordyceps
This fabled mushroom is good for stimulating energy and libido. It can improve exercise, athletic performance and muscle recovery and is known to improve lung capacity.

It has powerful anticancer properties, especially for leukemia. It is also good for managing cholesterol and heart disease.

Maitake (also known as Hen-of-the-woods)
Unlike some other mushrooms on the list, you can eat this one! Even though it grows on trees, it’s not a woody shelf mushroom and has a good texture and mild flavor.

The mushroom (fruiting body) contains polysaccharides such as beta-glucans, which have been linked to healthy cell growth and turnover. It can be used for high blood pressure, cholesterol, cancer, and diabetes.

Oyster mushroom (also known as Trumpet)
Edible and delicious, oyster mushrooms are full of antioxidants and they can alleviate inflammation, lower cholesterol levels, and boost brain health. They may even be able to help block cancer growth.

TCM practitioners have recommended tremella as a yin tonic for thousands of years to promote health, long life, and beauty.

Tremella is edible and can be found in many Asian dishes.

How to select quality medicinal mushrooms

Medicinal mushrooms are easy to incorporate into your wellness or treatment routine, by simply adding them to your cooked food or as supplements in tea and powder form. Nowadays there are many brands with varying quality products that offer mushroom teas, coffees, extracts and more.

The quality you pick depends on what you are looking for. Will it be used as a supplemental immune booster or calming aid, or are you looking for a treatment complement for a more serious condition that you also want to have approved by your holistic or naturopathic doctor?

To ensure you get a quality product, you can use the list below as a guide of what to look for when selecting medicinal mushrooms:

to ensure you get a medicinal mushroom product that is active and potent, look for a beta-D-glucans count rather than the polysaccharides

to ensure you get a product that is not mixed with brown rice or grain substrates to stretch an otherwise more expensive product. Look out for words that should NOT be present, like mycelium or biomass, which means it is mixed with other substances

It’s best to choose a product that contains fruiting mushroom bodies only and not mycelium, as that would be a less expensive but also less potent product

Growing in their natural environment makes the mushrooms stronger and more potent, and wood is the primary choice

It is always best to get non-pesticide treated, organic foods and supplements to avoid unwanted contaminants

A higher extraction ratio comes with more potent active compounds. Affordable qualities may have a 1:1 ratio but if possible, look for higher ratios, which can be up to 20:1.

To your happy and healthy "shrooming"!

This guide was started by me in 2009 as Belsandia.com and due to the immense popularity of our Health, Healing & Happiness™ events, we now added the lifestyle resources into one easy, interactive library for you here, so you can find all your holistic living needs all in one place!

I am grateful for your visit and hope you will find a little more health, healing & happiness on our pages!

Disclaimer: The information on this website is not intended as medical advice. It is solely based on the experience and information researched and gathered from reputable sources by Ina Mohan. Please consult with your certified healthcare provider to ensure that you can safely follow the healthy eating guidelines provided on this website. Ina Mohan encourages you to research and verify all health and diet information that you receive, particularly from sources that may have a commercial interest in disputing the healing capabilities of the human body with wholesome nutrition.

This website uses cookies so that we can provide you with the best user experience possible. Cookie information is stored in your browser and performs functions such as recognising you when you return to our website and helping our team to understand which sections of the website you find most interesting and useful.

Strictly Necessary Cookie should be enabled at all times so that we can save your preferences for cookie settings.

If you disable this cookie, we will not be able to save your preferences. This means that every time you visit this website you will need to enable or disable cookies again.